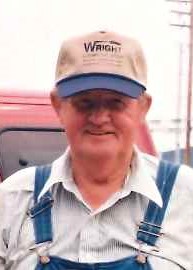 Tim attended Sorento schools and went on to work for Olin Mathieson for 44 years.  He also was a lifelong farmer, and he raised cattle and hogs.  Tim was a member of the Assembly of God in Sorento, served as Township Supervisor for 2 terms and Village Trustee for 3 terms, served on the Sunnyside Cemetery Board for many years, as well as the Farmers Livestock Board, and was a member of the Teamsters Local 50.

Tim was a professional cancer fighter, having fought courageously for over 18 years.  He loved his cows and riding around on his 4 wheelers and side by sides.  Tim also loved selling his flowers, cantaloupes, and watermelons to anyone willing to buy.  He was a true professional at many things in his life, but he was Hall of Fame worthy coffee drinker.

He was also preceded in death by his parents; stepmother, Bonadell Cruthis; and three brothers, Joy, Gerald, and Clarence Cruthis.

Please visit www.assalleyfuneralhomes.com to share memories of Tim, or to offer condolences to his family.

The family greatly appreciates donations made to these charities in Timothy Dove Cruthis's name.